Acupuncture, TCM, Thanksgiving and Me 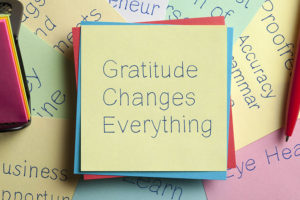 By Susan Tretakis, Coral Springs, Fl – This is my story. A story with an important timeline.

At the end of September in 2016, I was sitting in a small room, waiting to meet a new doctor. An acupuncturist. A doctor of Chinese Medicine.

Truth be told, I was annoyed. Very annoyed. I needed another doctor like I needed a frontal lobotomy. I was still reeling from the fact that my chiropractor, who I love, discouraged me from buying my way into the HCG diet program. At a hefty 274 pounds I more than qualified for a diet, and as I told him in my coolest, bitch-voice, I had been on every diet plan out there, had had a gastric bypass in 2004, therefore, I was the perfect diet candidate. He needed to help me, as a patient, a friend, as a fellow professional – and yes, I am not above pleading when it is necessary. I needed to lose weight fast – my orthopedic wanted to replace both of my knees, my general practitioner was squawking about my rising blood pressure and my anxiety was keeping me up nights. The holidays were coming – couldn’t he hear the desperation in my voice?

What was HIS problem?

I sat there dumbfounded as told me that he didn’t think I needed another diet. It was obvious I could lose weight, but it was just as obvious that I quickly gained it back. He suggested I meet with another doctor in the office – an acupuncturist.

So, there I sat, admittedly with a chip the size of Costco building on my shoulder, telling myself I’d give this doctor 15 minutes and then go get myself an ooey-gooey thick pan pizza and a bottle of wine and try again, somewhere for something, tomorrow.

The door opened and the doctor walked in. He introduced himself and yes, he was warm and friendly. Then again, my inner bitch reminded me, so is a puppy. He explained what acupuncture could and could not do. He gave me a brief overview of Traditional Chinese Medicine and Chinese Herbs. Because I knew he knew I was coming via my chiropractor, I had on my professional face: smiling, nodding asking a question I knew was expected – all the while thinking that he was really, truly, obscenely young.

Furthermore, what was I really doing here?

Apparently, with the right push from my chiropractor, I was about to participate in saving my own life.

I kept a journal of my TCM journey, and my early entries speak to the weirdness of sticking out my tongue and listening to my acupuncturist explain what my stomach, kidneys and liver were causing. I wrote about how touching it was for a doctor, any kind of doctor, to give a patient their email address saying “should I have a question or concern about anything, please write him.”

That journal entry is tagged: “As if I would ever write an email to a doctor!!!”

Because I still strongly held to my “never trust anyone under the age of 40” belief, I never even mentioned my weight as a concern. We discussed my anxiety. He gave me herbs. I wanted drugs. He said to try the herbs. I wanted answers to many questions; he gave me things to read.

By Thanksgiving of 2016, I was sleeping better. I usually don’t need a designated holiday season to turn up the volume of the noise in my head, but I did note that I wasn’t driving myself crazy with what I couldn’t and shouldn’t eat. I felt more in control of many things.

Every week, my acupuncturist – who in spite of still being obscenely young – also has an impressive, documented background in both nutrition and exercise physiology – made suggestions. Some things I would do. Some I chose not to. From the very start, it was his encouragement – my choice. However, since the foods that he suggested I eliminate – “just for two weeks” made such a difference in how I felt, I began to do everything he said. I still can’t say I was dieting – I was just choosing different foods. I was shopping and cooking. I was eating very colorful meals. I was drinking water and every single type of tea harvested. I was taking Chinese herbs.

My body was talking to me. It was telling me when it was full. I was listening. It was metabolizing the foods I was eating. By October of 2017, I had lost 100 pounds.

I wrote an email.

I wrote a long email.

I look forward to celebrating those anniversaries – and writing those emails – as well.

Health-wise and dental wise, most of 2017-2018 was a difficult year for me. Somehow, Traditional Chinese Medicine gave me the strength to become my own health advocate. Acupuncture – and my obscenely young acupuncturist – empowered me to take charge. I changed my general practitioner from one who was an alarmist to someone who was more in keeping with my beliefs. I began to question the drugs that were prescribed for me. As it was – and is – for many, these years were also difficult economically; TCM helped sharpen my coping skills and taught me how to hold my balance on a slippery slope of the unknown.

I have a friend who thinks I have “swallowed the TCM Kool-aid”. She keeps reminding me that I was trained as a scientist; how can I believe all of this stuff? Besides, it takes so long to see results.

I get that a lot; she’s absolutely right about the time. TCM is not a quick-fix. It takes time. There are missteps. It’s hard. I make my choices – and live with the consequences. It’s Kool-Aid of various flavors – sometimes sweet, sometimes not so much. But every sip moves you further into the light while teaching you to appreciate the darkness.

I just think that what makes Traditional Chinese Medicine unique is how it recognizes that we are reflections of our physical and emotional health. TCM sees emotional eating, arthritis, anxiety and depression and so much more as indications that something is out of balance.

One of the first things I felt from acupuncture was a sense of calm, a sense of being centered and relaxed. I found that as I continued with treatments I was less reactive to things – both to things I could and could not control. After each session, I feel more emotionally present – and as time goes on – I find I am able to hold on to that balance for longer periods of time.

Studying TCM brought me new insights into meditation and my own breathing. TCM gave me a multitude of resources that allowed me to make peace with food and liquor. TCM has shown me that the continued practice of mindfulness – the practice of being present and aware of my thoughts – connects to my body in ways I never imagined. TCM has brought me back to my spiritual center. It has taught me the importance of gratitude.

So, here it is November. Next month I’ll say good-bye to 2018. I know I’ll spend some time worrying about not being able to afford the types of gifts for friends who I would like to spoil. I know I’ll ache from the gym. I know I’ll miss friends who have left. I know there will be times that I will be envious of what I think others have that I do not. But this year, more than ever, thanks to TCM – as well as an acupuncturist who is no longer under the age of 40 – I’ll recognize these for what they are: just unpleasant thoughts that rather than obsess over, I’ll let drift by and away.

November 1st began “30 days of Gratitude”.   Tied to the American Thanksgiving, Gratitude is celebrated with daily TCM meditations, within the Jewish festival of Sukkot and by an increased self-awareness to identify, accept and if need be, change – what one is feeling. It is a good practice but hard to maintain, especially in these times – and it is – by no means – quick.

This November, I’ll concentrate on the fact that I am healthier than I have ever been; I’ll celebrate that my family’s DNA is not my destiny and I’ll be grateful for all of the new friends I’ve met these past three years. I’ll celebrate that I still have my original knees.

This Thanksgiving, I’ll celebrate my successes and try to learn from my stumbles. I’ll send an extra dose of protective and healing Reiki to my chiropractor, silently asking his forgiveness for my temper tantrum when he wouldn’t do what I wanted – insert bratty foot stomp here – instead choosing what was best for me.

And lastly, I’ll thank that incredible Coral Springs acupuncturist who put up with my many moods, many questions, many, many emails and my list of complaints of illnesses longer than a CVS register receipt with a smile, kind words and worthwhile lessons.

I take full responsibility for having aged him in dog years.

It is a bountiful Thanksgiving.  I wish each of you the same.