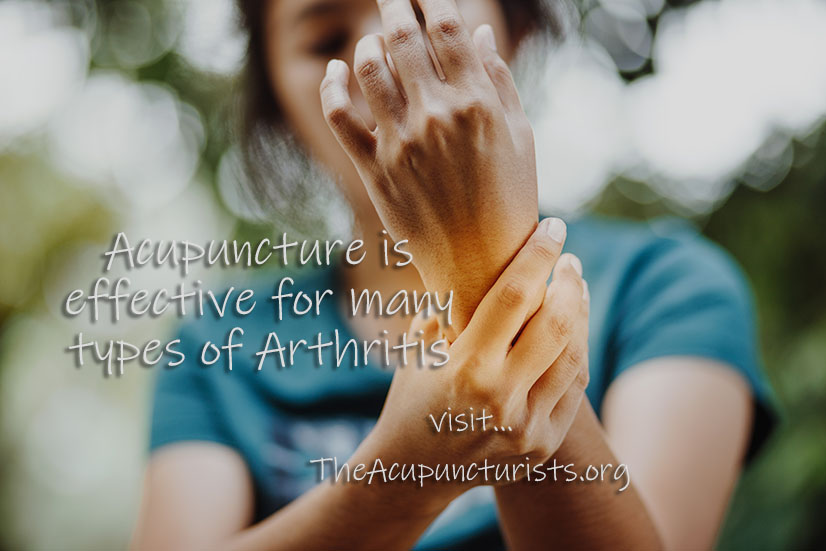 By The Acupuncturists – Coconut Creek, Florida – Acupuncture can curb pain and stiffness caused by arthritis by boosting the amount of endorphins your body makes. The release of these natural pain killers is just one way acupuncture works for many conditions, including arthritis in its many forms. In this article we will break down the causes, treatments and alternative methods that work. Let us first start at the beginning…

It is easier to describe what arthritis is than to define it. This is because arthritis isn’t a single condition but rather a general term used to refer to a group of related joint ailments and joint pain. Indeed, there are at least a hundred known arthritic conditions that impact on joints. The various arthritic conditions have different causes, although they all ultimately result in inflammation. Luckily, acupuncture and Chinese herbal medicine have prove to offer sustainable results.

Some of the common types of arthritis (that acupuncture can effectively treat) include:

Osteoarthritis normally impacts on joints which bear weight including knees and hips and makes the affected areas quite painful. The onset of the condition is gradual, taking anywhere between several months to years.

Rheumatoid arthritis – Rheumatoid arthritis, or RA, is an autoimmune condition, meaning that the body’s immune system that is supposed to protect the body from disease causing pathogens inadvertently attacks the joints. This causes inflammation and severe damage to the joints, especially when left unchecked. Having a rheumatoid nodule or a lump on the skin is perhaps the most clear-cut symptom of rheumatoid arthritis and it often affects joint regions that are under a lot of pressure, for example hands, feet and elbows.

Ankylosing Spondylitis – are autoimmune diseases which usually attack areas where ligaments and tendons are attached to the bone. These conditions cause pain as well as stiffness, particularly at the lower back.

Gout – Gout is another type of arthritis that is prompted by the buildup of urate crystals in the joints. Having a high level of uric acid in the blood stream increases the risk of contracting gout. The CDC (Centers for Disease Control and Prevention) estimates that nearly 4% of Americans have gout (Zhu et al, 2011). Men are at a significantly greater risk of getting gout than women. Other risk factors include the type of diet consumed, age and alcohol use.

Others – Many other types of arthritis as well as other conditions may also result in joint pain. Examples include scleroderma and fibromyalgia.

Some common symptoms of arthritis include minimized range of motion, stiffness, swelling as well as pain. Symptoms can appear and then disappear. They can range from mild to moderate to severe and they usually remain about the same over a long duration of time but they can get worse or advance with time. In severe cases, sufferers experience chronic pain coupled with an inability to carry out daily chores, such as difficulty in walking or climbing stairs.

Arthritis can also result in lasting changes at the joints that may be visible, i.e. lumpy finger joints in RA, while other damages can only be observed through X-ray. Some kinds of arthritis are known to affect other organs apart from joints and skin such as the eyes, lungs, kidneys and even the heart.

The Western medical treatment of arthritis focuses on reducing pain and preventing more damage to affected areas. It is also important to improve the functioning of the joint and a combination of medication is usually prescribed. Some medications prescribed for arthritis include analgesics like acetaminophen and hydrocodone for managing pain. However, these medications do not help reduce inflammation at the joints. Other medications include NSAIDS (nonsteroidal anti-inflammatory drugs) and capsaicin creams.

Physical therapies including exercises and massage are a key treatment procedure in the healing of arthritis. In severe cases of arthritis, especially at the knees and the hips, surgery may be suggested and an artificial joint can replace the natural one. Joint fusion may be done to treat severe arthritis of wrists and finger joints.

However, many Western medical practitioners recommend that patients of even the most stubborn and severe arthritis cases consider acupuncture and Chinese medicine before considering surgery. Indeed, many patients of chronic arthritis have escaped the knife and have found reprieve in acupuncture treatment.

The question many arthritis sufferers and their caregivers ask is whether acupuncture and Chinese medicine can treat arthritis effectively. According to research such as the ones cited by Guillaume & Chieu in their 2002 “Rheumatology in Chinese Medicine Report” and Bensky & Barolet’s “Chinese Herbal Medicine” (1990), acupuncture and Traditional Chinese Medicine (TCM), in clinical studies, have proven to be extremely effective in the treatment for inflammations and pains related to all forms of arthritis.

Just like Western medical practitioners, acupuncturists do not consider arthritis as a single ailment; rather, they focus on treating the patient as a whole while considering particular symptoms which are distinctive to each patient. TCM holds that arthritis develops due to the blockage of the flow of the body’s key energy that’s known as “Qi” in Chinese medicine.

Furthermore, Ezzo et al (2001) and White et al (2007) observe that acupuncture and TCM are particularly effective because it tailored treatment for each unique condition of each patient. They also point to the fact that numerous patients get relief from TCM without the depressing side effects which accompany Western medications.

The latest study by the US National Institutes of Health (NIH) on acupuncture and arthritis is one of the largest and longest clinical trials to show positive conclusive effects – patients who underwent acupuncture treatment reported a 44% average reduction in pain and a 40% improvement in mobility.

The World Health Organization recognizes about 30 medical problems, including arthritis, that can be helped by acupuncture treatment. The FDA also sees acupuncture needles as medical devices.

The Acupuncturists, Dr. Robert Herbst and Dr. Landon Agoado, have experience and success treating arthritis in its many forms. They proudly serve the communities of Margate, Coconut Creek, Coral Springs, Tamarac, Parkland, Deerfield Beach, and West Boca and have been successfully treating arthritis in their clinic for many years. They want to help you get out of pain too. Take advantage of their expertise, get started today!