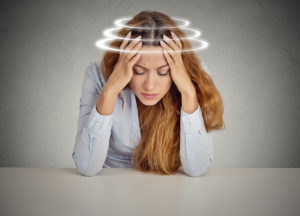 By Susan Tretakis – I don’t “get” these people who love amusement park rides; I don’t understand why someone would pay steadily rising park entrance fees to take a roller coaster ride which goes up and around the track at steadily increasing speeds. I don’t see the allure of that even crazier “tilt-a-world” ride which not only spins you around at increasing speeds but then gives you the sensation of being flipped over.

I don’t have to pay anything for these sensations; I suffer from periodic bouts of vertigo – and trust me – they are no joy ride.

WebMd defines vertigo as a sensation of feeling off balance. One may be dizzy, or feel that either they are spinning or the world around them is spinning.

Few people realize how debilitating vertigo can be. It’s not a headache or a shoulder ache or a stomach ache – something you can deal with or “soldier through” and go on with your job or life. Vertigo holds you captive – and depending on the type of vertigo you suffer, it doesn’t let you go until either a cranial manipulation or some other intervention is involved.

Vertigo is the rollercoaster ride that has “bought” you.

WebMd continues to say that “vertigo is often caused by an inner ear problem and one of the most common causes is “BPPV, initials that stand for benign paroxysmal positional vertigo. BPPV occurs when tiny calcium particles (canaliths) clump up in canals of the inner ear. The inner ear then sends signals to the brain about head and body movements relative to gravity. BPPV can occur for no known reason and may be associated with age.”

Of course it is; old age continues to bring such surprises.

I had my first vertigo attack about four years ago – before I even knew about TCM. My then-general practitioner sent me to a neurologist who sent me for an MRI of my head. When that MRI showed nothing out of place, he sent me for a second MRI with dye – which still showed nothing amiss. The neurologist treated me with what he referred to as the “Eply maneuver” which worked, but since he told me that only a trained professional could do the maneuver, it was necessary for me to re-visit his office on a monthly basis.

The “Eply maneuver” is a documented procedure which involves the re-positioning of your head so that your inner ear clears itself out. However, in my case, I found it to be a short-term fix. He did say there were some “new and experimental drugs” for vertigo but the “new and experimental” part bothered me. And since each “Eply maneuver” only made me more nauseous – and one time – obviously, the last time – made me so nauseous that I embarrassed myself by throwing up on my neurologist – barely missing his feet.

Perhaps this was my silent – albeit messy – comment on Western treatment.

Since that time, I have learned from my chiropractor that it is possible for one to do the Eply method on themselves. Since that time, my chiropractor introduced me to my TCM doctor who has treated me with acupuncture and Chinese herbs. Knowing how much I disliked the “Eply maneuver”, my acupuncturist sent me a link for the “half somersault maneuver” which I keep on my cell phone and on my computer, because with vertigo – one never knows.

And since that time, I have never thrown up on either of them.

Modern Reflexology writes that “Vertigo, dizziness, and fainting are common problems that can occur in people of any age, but they are more common among older adults. Although, light-headedness and fainting are mainly caused due to general weakness, vertigo is a symptom in itself that is marked by a specific kind of dizziness in which the individual feels that the surrounding is moving, although there is no actual movement. The person can also feel as if he is off balance, with sensations of tilting, spinning, whirling or falling. Severe vertigo can trigger nausea, vomiting and loss of balance. Some common causes of vertigo and dizziness are Vestibular neuritis or labyrinthitis, Meniere’s disease, and BPPV or benign paroxysmal positional vertigo. Acupuncture, acupressure and reflexology help in treating the symptoms of vertigo along with dizziness and fainting by restoring the energy flow in the body.”

Acupuncture Today reports that “In Traditional Chinese Medicine, vertigo and dizziness are due to symptom-complexes of root deficiency and branch excess. There are a variety of etiological factors that can cause the condition. Emotional depression or anger can damage liver yin and result in the rise of liver yang. Extended illness, stress, anxiety, over-pensiveness, or weak heart and spleen can cause deficiency of qi and blood. Improper diet and eating habits, stress and overwork, can damage the spleen and stomach, allowing obstruction of the middle ‘jiao’ by phlegm-dampness or phlegm-fire. The pathogenesis of vertigo and dizziness is complex, and basically all cases will involve wind, fire, phlegm, or deficiency.”

In the clinical practice of TCM, vertigo and dizziness are distinguished by degree.

Acupuncture Today continues: “The etiological cause is an underlying deficiency of spleen ‘qi’ with accumulation on heat in the middle ‘jiao’. This leads to food stagnation and phlegm, and if truth were told, phlegm is the key pathogenic factor in vertigo. Underlying deficiencies of kidney yin and jing can generate liver wind, driving phlegm upwards. In TCM, this can be referred to simply as endogenous wind-phlegm. Effective herbal formulas should address this complex of deficiency, wind, heat and phlegm.”

Bless Traditional Chinese Medicine – and bless the Chinese herbs that along with acupuncture, restore my balance.

Bless the holistic and TCM trained doctors who diagnose, explain, and advise on which foods to eat, to avoid and the importance of daily hydration.

On Sixfishes.com, Cara O. Frank, L.OM shares the following excerpt from her book, “TCM Case Histories: Eyes, Ears, Nose and Throat Disorders”: “Treatment consists of medications to manage the dizziness and accompanying nausea. For BPPV, the main treatment is canalith repositioning. Drugs such as meclizine, diazepam, and lorazepam can help relieve dizziness and shorten the attack. Salt restriction and diuretics may help some people control dizziness by reducing the amount of fluid the body retains, which may help lower fluid volume and pressure in the inner ear. Some people may benefit from restricting caffeine, chocolate and alcohol.”

Livestrong also credits Life Extension for noting that “vitamin B6 appears to be beneficial for those who suffer from vertigo. B6 appears to reduce the dizziness and nausea that vertigo causes.”   Dr. Axe will tell you that adding more B6 to your diet is simple – to just add “meat such as chicken and pork, fish that includes salmon and tuna, peanut butter, beans, bananas, walnuts, spinach and avocados.”

My vertigo has been diagnosed as textbook BPPV vertigo, so chiropractic / physical therapy interventions are sometimes needed. I’ve re-done my computer area, and am much more aware of my neck and head positions. Because of TCM, I’ve been able to avoid pharmaceutical drugs; weekly acupuncture, daily Chinese herbs, relatively simple lifestyle and dietary changes have all lessened the number of vertigo attacks I have suffered over time. At my worst, I used to experience an attack almost twice a month; now, I can be vertigo-free for almost 4 – 6 months at a time. However, make no mistake, when I do have an attack, it is not in any way amusing or fun.

Which is why I still wonder about those people who wait on line for a seat on “the wildest, scariest roller-coaster ride EVER!”