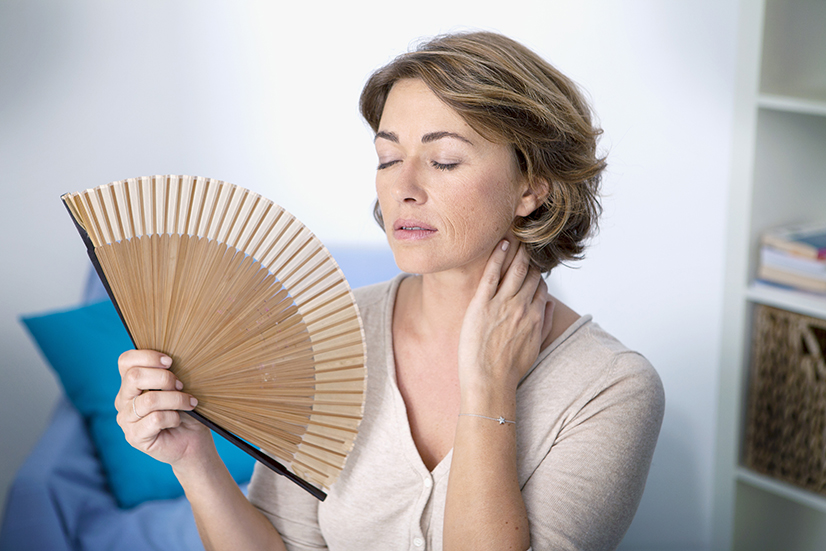 Coral Springs, Florida – Menopause is the time in a woman’s life when her menstrual cycle stops. It is usually diagnosed when a woman’s period has stopped for more than twelve months. It could happen anywhere between the ages of 40 to 50, but in the United States, the average for most woman is around age 51.

Symptoms usually include, but are not limited to:

First, and perhaps foremost, it is important for women to remember that menopause is a natural biological process which includes hormonal changes. A female is born with about 2 million eggs in her ovaries, each in its own follicle. As one ages, the fewer follicles remain. Ovaries are the source of estrogen and progesterone, the two key hormones that control the reproductive system.

There are two key hormones involved in menopause — Luteinizing Hormone (LH) and Follicle-Stimulating Hormone (FSH).  As ovaries age and release fewer hormones, FSH and LH can no longer perform their usual functions to regulate your estrogen, progesterone and testosterone.

Clinically, elevated follicle-stimulating hormone (FSH) levels in the blood test are measured to confirm menopause. When a woman’s FSH blood level is consistently elevated to 30 mIU/mL or higher, and she has not had a menstrual period for a year, it is generally confirmed that she is officially in menopause.

While many women’s symptoms of menopause go away without treatment, some might lead to further complications, including cardiovascular disease, osteoporosis, urinary incontinence, sexual dysfunction, weight gain and emotional disorders.

Conventional medicine tends to treat symptoms of menopause via Hormone Replacement Therapy (HRT). Low doses of estrogen and progesterone are usually taken orally or by a skin patch. Although the risks and benefits of HRT are still being debated, data from the National Institutes of Health has has shown that synthetic hormones can increase a woman’s risk of blood clots and stroke, as well as breast cancer and ovarian cancer. These results were subsequently published in JAMA, the “Journal of the American Medical Association”. 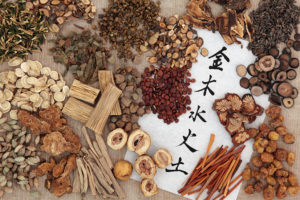 Traditional Chinese Medicine (TCM) holds a different view. Since menopausal symptoms are due to the decline of estrogen and progesterone occurring at this time, practitioners of TCM believe these symptoms are due to the physiological decline of kidney essence. While the phrase “Kidney essence” may seem somewhat strange to you, simply replacing it with the phrase “growth hormone” may help you understand the TCM viewpoint more easily.

Kidney essence is discussed in the very first chapter of an ancient Chinese classical book of medicine <黄帝内经>, (translated as Yellow Emperor’s Canon Internal Medicine), which says that in girls, it arrives when she is 14 (7×2) and it dried up when she is 49 (7×7):

“At the age of 14 the kidney essence arrives, the Ren channel begins to flow, the Chong channel is flourishing, the periods come regularly and she can conceive. By the age of 42 (6 x7), her three Yang channels all begin to decline. By this time, her face complexion becomes wane, and her hair begins to turn white. At the age of 49 (7 x 7), her Ren and Chong channels are both declining, her menstruation stops as her kidney essence is being exhausted. Her physique turns old and feeble, and by then, she can no more conceive.” (Yellow Emperor’s Canon Internal Medicine, English by Nelson Liansheng Wu, Andrew Qi Wu).

As compared to prescriptive drugs, Chinese herbs are well known for their gentle, safe and effective treatment of menopause symptoms.  Since “kidney essence” is the key factor in growth development, reproductive function and aging, these three groups of kidney deficiency syndromes are closely related to menopause. Let’s discuss them individually.

Menopause is a special journey of women’s life; one should not only embrace it as part of the natural process, but should also should seek support from friends, family and of course, their TCM team. Simply sharing your symptoms with others is a therapy itself.  Your body is “graduating” to a new, higher level; incorporating this positive “mind/body” relationship and making some easy, positive life style changes, to include eating balanced meals, Chinese herbs and supplements along with exercise can help.

Remember, TCM treats the entire person as an individual. There is no one herbal mixture for everyone. Women have different body types, metabolism rates and experience different social environments. TCM treatments may differ between women who have similar symptoms. You should be open and honest when discussing your symptoms with a licensed acupuncture physician. All herbs should be prescribed by a licensed acupuncturist to be safe and effective.

Let me conclude with a quote from Dr. Nan Lu’s book, Traditional Chinese Medicine: A Women’s Guide to a trouble-Free Menopause, which offers great inspiration of how we should value menopause:

“TCM sees menopause as a deep energy shift that extends beyond physical changes. It’s a natural and normal part of a woman’s life, yet it has the power to affect her mind, emotions and spirit. Menopause is an energy gateway—a unique chance for a woman to prepare her body, mind and spirit for a healthy, long life. It’s a time when she can heal, strengthen herself, and balance and harmonize her energies. Menopause creates the opportunity for a transformation, a new beginning, as a woman becomes free to discover, pursue or complete her life’s mission and touch her spirit—and the spirits of those around her—in a profound and meaningful way.”

One of our specialties is treating women with the symptoms of menopause. We have had much success using acupuncture and traditional Chinese herbal medicine to treat a wide array of conditions. Schedule a free consultation with one of The Acupuncturists today.