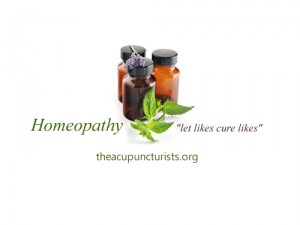 Along with Chinese herbs, we often utilize homeopathy to treat many conditions. Our homeopathic remedies come in various forms – pills, tinctures, creams or gels, and sometimes injectables. We only use the highest quality homeopathic medicine from GUNA, HEEL and HEVERT. If you’re interested in homeopathic remedies for a condition you’re suffering with please schedule a free consultation with Dr. Landon Agoado. Read more about Homeopathy below…

Homeopathy is a system of medicine that is based on the Law of Similars. The truth of this law has been verified experimentally and clinically for the last 200 years.

Let’s look at an example: If your child accidentally ingests certain poisons, you may be advised to administer Syrup of Ipecac to induce vomiting. Ipecac is derived from the root of a South American plant called Ipecacuanha. The name, in the native language, means “the plant by the road which makes you throw up.” Eating the plant causes vomiting.

When a group of healthy volunteers took this substance to determine the effects of this drug, they found that the drug induced other symptoms as well. The mouth retained much saliva. The tongue was very clean. There was a cough so severe that it led to gagging and vomiting. There was incessant nausea. While it is expected that vomiting would usually relieve the nausea, this was not the case.

Such an experiment, using healthy volunteers, is called a proving, and it is the homeopath’s source of information about the action of a drug.

Of what use could this plant be? If a person were suffering from a gagging cough after a cold, or a woman were experiencing morning sickness with incessant nausea that is not relieved by vomiting, then Ipecacuanha, administered in a minute dose, especially prepared by a homeopathic pharmacy in accordance with FDA approved guidelines, can allay the “similar” suffering.

Samuel Hahnemann described this principle by using a Latin phrase: Similia Similibus Curentur, which translates: “Let likes cure likes.” It is a principle that has been known for centuries. Hahnemann developed the principle into a system of medicine called homeopathy, and it has been used successfully for the last 200 years.

Homeopathy and its Clinical Use

Homeopathic treatment offers a different approach to health than conventional medicine. Whereas conventional medicine looks at symptoms as something wrong that needs to be “fixed” or suppressed, homeopathy considers symptoms as signs that the body is attempting to get back in a natural state of health. Homeopathic treatment  focuses on helping the body heal itself and strengthen the immune system rather than “suppressing symptoms” or “killing the germs.”

Also, a definite diagnosis is not necessary in order to treat a very long list of functional problems. And last but not least, homeopathic treatment is completely safe and the remedies have no side effects, unlike many traditional chemical drugs.

Homeopathy is a system of natural healing based upon the idea that a substance which can create the symptoms of a disease in a healthy person, will actually cure the symptoms of the disease in a sick person. Hahnemann, the founder of homeopathy, called this principle “similia similibus curentur” or “let like be cured by like.”

WHAT IS MEANT BY CLASSICAL HOMEOPATHY? The basic rule in Classical Homeopathy is that only one specific remedy is given to the patient, in contrast with “complex homeopathy” where a mixture of several different remedies is administered and which actually violates the basic principle of homeopathy. The choice of this remedy is based on not only characteristic physical symptoms, but especially on mental or emotional states of the patient.

What is a Homeopathic Remedy and how is it used?

Homeopathic remedies are natural substances prepared in a specific way and extremely diluted so that there is no molecule of the original substance remaining. This is why skeptics of homeopathy say that it doesn’t work. Yet, the more diluted, the more potent the remedies are. It is as if the remedy, through the process of dilution and succussion, enhances an imprint or the energy of the essence of the substance. When the correct remedy is selected, it can help re-balance the organism – the vital force of a person – and healing can be immediate and permanent.

Muscle Testing – or Applied Kinesiology – can be used to help test for the right homeopathic remedies, and to help identify any allergies and intolerances. It is widely used by NAET practitioners to confirm allergies and sensitivities to certain foods, chemicals, etc. It is also widely used by many homeopathic doctors to help determine the correct remedy for the patient.

Applied kinesiology or Muscle Testing is a system that evaluates structural, chemical, and mental aspects of health using manual muscle testing alongside conventional diagnostic methods. The essential premise of applied kinesiology that is not shared by mainstream medical theory is that every organ dysfunction is accompanied by a weakness in a specific corresponding muscle, the viscero-somatic relationship.

A manual muscle test in Applied kinesiology is conducted by having the patient resist using the target muscle or muscle group while the practitioner applies a force. A smooth response is sometimes referred to as a “strong muscle” and a response that was not appropriate is sometimes called a “weak response”. This is not a raw test of strength, but rather a subjective evaluation of tension in the muscle and smoothness of response, taken to be indicative a difference in spindle cell response during contraction.

These differences in muscle response can be indicative of various stresses and imbalances in the body. A weak muscle test is equated to dysfunction and chemical or structural imbalance or mental stress, indicative of suboptimal functioning. It may be suboptimal functioning of the tested target muscle, or a normally optimally functioning muscle can be used as an indicator muscle for other physiological testing. A commonly known and very basic test is the arm-pull-down test, or “Delta test,” where the patient resists as the practitioner exerts a downward force on an extended arm. Proper positioning is paramount to ensure that the muscle in question is isolated or positioned as the prime mover, minimizing interference from adjacent muscle groups.

“Nutrient testing” is used to examine the response of various of a patient’s muscles to assorted chemicals or homeopathic remedies. Gustatory and olfactory stimulation are said to alter the outcome of a manual muscle test, with previously weak muscles being strengthened by application of the correct nutritional supplement or homeopathic remedy, and previously strong muscles being weakened by exposure to harmful or unbalancing substances or allergens.