“I was always incredibly obsessed with germs and cleaning and taking shower after shower after shower. Even when I was very young, I wouldn’t tie my shoelaces because they had touched the ground. I had continuous repetitive thoughts that I couldn’t get past.  After I impulsively revealed that I have OCD on a talk show, I was devastated. I often do things without thinking. Out in public, after I did the show, people came to me and said, ‘Me, too.’ They were the most comforting words I’ve ever heard. Whatever you’re dealing with in life, know that you’re not alone.”   Here’s the Deal, Don’t Touch Me – written by comedienne Howie Mandel 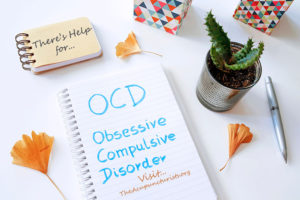 By Susan Tretakis –  Obsessive Compulsive Disorder (OCD) is a mental health condition that affects all people of all ages in all walks of life.   OCD “occurs when a person gets caught up in a cycle of obsessions and compulsions. Obsessions are unwanted, intrusive thoughts, images or urges that trigger intensely distressing feelings. Compulsions are behaviors an individual engages in to attempt to get rid of the obsessions and/or decrease his or her distress.”

Much of the problem for true sufferers of OCD are that words like “obsessing” or “being obsessed” are commonly used in everyday language. I have a friend who tells everyone she is “obsessed” with finding the perfect pair of jeans; another “compulsively” checks her hair for gray roots. I, personally am “obsessed” with CBS’s NCIS, never failing to watch a television marathon as well as taping each show of each season.

These casual references simply mean a person is simply preoccupied with either a topic, an idea or a person. “Obsessed” in this everyday sense doesn’t involve problems in day-to-day living and even has a pleasurable component to it. You can be “obsessed” with a new song you hear on the radio, but you can still meet your friend for dinner, get ready for bed in a timely way, get to work on time in the morning, etc., despite this “obsession”.

In fact, it’s my personal belief that individuals with OCD have a hard time hearing this everyday usage of “obsession” as it diminishes their very real, very painful struggle with OCD symptoms.

“Similar to obsessions, not all repetitive behaviors or “rituals” are compulsions.  You have to look at the function and the context of the behavior. For example, bedtime routines, religious practices, and learning a new skill all involve some level of repeating an activity over and over again, but are usually a positive and functional part of daily life.

Behaviors depend on the context. Arranging and ordering books for eight hours a day isn’t a compulsion if the person works in a library. Similarly, you may have “compulsive” behaviors that wouldn’t fall under OCD if you are just a stickler for details or like to have things neatly arranged. In this case, “compulsive” refers to a personality trait or something about yourself that you actually prefer or like.

In most cases, individuals with OCD feel driven to engage in compulsive behavior and would prefer not to have to do these time consuming and many times torturous acts. In OCD,  compulsive behavior is done with the intention of trying to escape or reduce anxiety or the presence of obsessions.”

WebMD further clarifies: “Obsessions and compulsions can involve many different things, like a need for order or cleanness, hoarding, and intrusive thoughts about sex, religion, violence, and body parts.”

Obsessive thoughts can include:

Compulsive habits can include:

“Classical Chinese medicine considers the affliction of Obsessive Compulsive Disorder (OCD) an energy dysfunction of the major organs. The beauty of Chinese medicine is that one disease can be delineated in to many patterns; this allows Chinese medical practitioners such as Chinese acupuncturists and herbalists to design a treatment for a specific patient rather than using one treatment to address all patients. This makes Chinese medicine a more specific and focused way to help address OCD used along with professional mental health care.”

As a mental health practitioner and counselor, I have sat in many CEU classes about OCD. Many of my clients and my colleagues suffer from this debilitating illness. I have learned the recognized prescribed medications and studied the use of conventional, Western talk therapy. Yet, I have to admit that the – for lack of a better word – “precise-ness” – of a TCM diagnosis – astounds my inner scientist.

“In Traditional Chinese Medicine, OCD is addressed according to the way it presents and the type of symptoms that occur. It is important to know that more than one organ system imbalance is typically involved with OCD. For example, an imbalance in the Spleen results in repeated and unwanted thoughts. Imbalances in the Kidney result in fear that leads to compulsions or rituals. Fear of dirt or contamination by germs is common in a Kidney imbalance.

Additionally, OCD sufferers may have an unhealthy preoccupation with traits that relate directly to a Lung disorder. This would be those who have a preoccupation with rules, schedules and lists and who would be critical and demand perfection. Individuals with a Lung imbalance would be excessively devoted to work and seem emotionally rigid and inflexible.

Emotionally, the Heart – and by connection the Stomach – help us sort through information, emotions, and food – as well as deciding what is precious and what should be kept, and what should be let be discarded. When this ability is impaired, someone may have a tendency to hoard as well as suffer from palpitations. Since OCD is often complicated with episodes of depression, there may be an imbalance in the Liver. Emotions relating to a Liver imbalance may result in fear of making a wrong decision, as well as anger, frustration and a feeling of being ‘stuck’ in life.”

Currently, most of the medicine that is prescribed to help OCD include anti-anxiety and antidepressants. Unfortunately, for many, these medications have dangerous side effects. The research shows that Acupuncture may be an alternative treatment to OCD. “Acupuncture works by the specific placement of needles on different points throughout the body. These points work to release blockages in the body and return the body back to its natural flow and as a result, back to health. In addition to addressing various blockages around specific organs, Acupuncture is known to lower stress and anxiety levels to calm the mind. When this happens, a person is less likely to have compulsive tendencies.”

Other types of TCM therapy may also prove beneficial for sufferers of OCD. “Tong Ren Therapy” is designed to help heal a patient’s energy system using the collective unconscious. Supplementing both Acupuncture and Tong Ren with dietary changes may help as well. Eating excessive amounts of refined sugars may cause fluctuations in blood sugar and insulin levels. Researchers have identified that ingesting large refined sugar can deplete B vitamins from the body, which can affect the nervous systems. TCM suggests that “excessive amounts of caffeine can create ‘”toxic heat” in the liver, increasing one’s anger and anxiety. Therefore, replacing refined sugars and caffeine with low glycemic foods and beverages can help reduce anxiety. Certain Chinese herbs may also prove to be beneficial.”

OCD is a very real, very upsetting and unsettling disorder. Research has shown that both Traditional Chinese Medicine and Acupuncture have helped many people with OCD, among other psychological conditions. Most of us are unaware that TCM can be a viable treatment. As advocates for our own health care, it is imperative that we know all that we can about complementary health care treatments.

If you or a loved one is suffering from OCD we want you to know that there is help. Call and schedule with one of our skilled, experienced acupuncturists today and receive a free consultation. We serve the communities of Coral Springs, Coconut Creek, Margate, Tamarac, Parkland, Deerfield Beach and West Boca.