“While I do not have a choice of whether or not I have Parkinson’s, surrounding that non-choice are a million other choices I can make.” Michael J. Fox, 2014 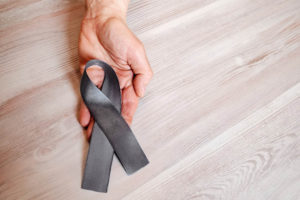 By Susan Tretakis – Because of the very vocal and informed voice of Michael J. Fox as well as other public figures, more is known about Parkinson’s disease than ever before. Parkinson’s is the second most common chronic and progressive neurodegenerative disease in the United States, ranking just under Alzheimer’s in its devastating impact. Symptoms of Parkinson’s progress slowly over the years. Parkinson’s is unique in that the symptoms vary from individual to individual for a variety of reasons.

Generally speaking, individuals with Parkinson’s suffer tremors in the hands and feet, have gait and balance problems, move slowly, and at times, suffer from rigid limbs. As symptoms get worse, people with Parkinson’s may have trouble walking, talking, or doing simple tasks. Sufferers may also have problems with depression, sleep problems, trouble chewing, swallowing and speaking.

To date, the cause of Parkinson’s is unknown, but doctors and scientists are studying genetic links, environmental links as well as a combination of the two. Research continues every day. Unfortunately, it is generally impossible to determine what specifically causes Parkinson’s disease in individuals. Because there are no specific lab tests for Parkinson’s, it is that much more difficult to diagnose. Most doctors use a medical history and a neurological examination to diagnose it.

The literature is conflicted on many issues: while it is generally thought that Parkinson’s begin around age 60, there are individuals who may suffer symptoms as young as age 30. While it used to be believed than more men than women suffered from Parkinson, that number is currently being modified. A variety pf medicines are prescribed to help with tremors and in severe cases, surgery and deep brain stimulation (DBS) can help. DBS refers to the implanting of electrodes in the brain to send electrical pulses to stimulate the parts of the brain that control movement.

There have been numerous studies that have highlighted factors associated with an individual having a greater or lesser risk of Parkinson’s. Studies exist that show smoking and caffeine consumption have an effect, as do people who suffered from head injuries and exposure to various pesticides. It needs to be noted that more research is needed in this area, if only to provide the public with risk-prevention and/or treatment strategies.

This leaves me with a simple, albeit uncomfortable question: If the cause of Parkinson’s disease is unknown, then there is no scientifically validated preventive course to reduce one’s chance of contracting the illness. If the single biggest risk factor for Parkinson’s disease is advancing age and there is no known cure, then how do we help current sufferers live their best possible life, in spite of their limitations?

Many of the drugs used to treat Parkinson’s have long-term side effects, causing many to look for safe and effective alternative treatments. Traditional Chinese Medicine has an over 3000 year history of treating symptoms of trembling and convulsive diseases, with both Acupuncture and Chinese Herbal Medicine. Researchers have looked at Acupuncture for its potential benefit on motor symptoms as well as several non-motor symptoms: pain, fatigue, depression, anxiety and sleep disturbances.

“Acupuncture is one of the most commonly used complementary therapies in patients with PD. Acupuncture has been reported to have possible therapeutic effectiveness for PD in clinical trials, as manifested by improvement in clinical symptoms such as tremor, a decrease in the dosage of antiparkinsonian drugs, a decrease in side effects, and improvements in daily life, such as improved sleep, better mood and less anxiety. Increasing evidence shows that Acupuncture can alleviate the symptoms of PD, delay the progression of these symptoms, allow for a decrease in the dosage of antiparkinsonian drugs, and decrease side effects. It’s important to recognize that Acupuncture treatment not only treats the brain where the dopaminergic neurons have been lost, which is the hallmark of Parkinson’s, but also benefits the other organ systems of Traditional Chinese Medicine. Therefore, Acupuncture is extremely helpful in helping the patient cope with non-motor related symptoms and improve their overall quality of life.”

Just as there are multiple drug trials being performed on a regular based by the FDA, scientists are also looking at how Chinese Herbs affect “the shakes”, now known as Parkinson’s disease. One herb, known as “gou teng” is an herb with a hook-like branch. Early last year, 115 people with Parkinson’s were given a combination of traditional Chinese medical herbs, including gou teng or a placebo for 13 weeks. At the study’s conclusion, volunteers who had taken the herb slept better and had more fluent speech than those taking the placebo.

According to a report from Li Min, a Traditional Chinese doctor at Hong Kong Baptist University, repeated trials have shown that “gou teng” appears to stabilize symptoms of Parkinson’s disease. Her report documents how:

“Parkinson’s symptoms, such as muscle tremors, slowness of movement and rigidity, are caused by the progressive destruction of brain cells that produce dopamine. Previous work has suggested that an abundance of a protein called alpha-synuclein may be to blame. Current treatments aim to boost levels of dopamine, which only partly alleviates symptoms and does not affect the protein clusters. It is thought that clumps of alpha-synuclein accumulate because brain cells cannot remove them through autophagy – a type of programmed cell death. Mice without the genes needed for autophagy quickly develop Parkinson’s-like symptoms. According to Li, autophagy is the only known process that gets rid of abnormal proteins within cells. “Enhancing this pathway may be key to treating Parkinson’s,” she says.” 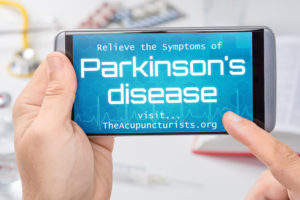 For a variety of reasons, more and more people are looking at holistic approaches to treating Parkinson’s disease. Complimentary medicine can provide treatment options that complement traditional therapies. While complimentary medicine cannot – at this time – replace traditional therapies, people with Parkinson’s have found varying levels of relief from Traditional Chinese Medicine, Herbal Medicine, Acupuncture, Massage Therapy and treatments that encourage mindfulness, “to be here now”..

Coming to terms with chronic and catastrophic illness is difficult and overwhelming for both the patient and his/her caregivers. “Quality of life” is a phrase not usually looked at in a scientific manner, but I think it should be. If Acupuncture and Chinese Herbs can help improve mood, lessen anxiety and allow one to properly rest then perhaps it should be on every medical doctor’s prescription pad for Parkinson’s patients. If tremors can be lessened without the long term side of effects of pharmaceutical drugs but by herbs, perhaps continued research and study needs to be done. If mindfulness training can help a patient stay in the here and now and not obsess about future complications, then add that to the prescription for care.

Research for this article left me extremely conflicted. While I am hopeful that the public clamor about Parkinson’s will continue to increase and a cure will be found, I am angry that that day will be tomorrow and was not yesterday. As a mental health practitioner I have seen both the emotional and physical suffering that Parkinson’s has caused both the patient and the immediate family. It is at times like this that I remember the words of Dr. Patch Adams, portrayed in the movie about his life by actor by Robin Williams (ironically another sufferer of Parkinson’s) who said, “When you treat the illness, it’s a win or a loss. If you treat the patient, it’s always a win.”

It is times like this that I remember that Acupuncture and Traditional Chinese Medicine have consistently treated the patient and not the disease.

And that gives me even more hope. The Acupuncturists serve the communities of Margate, Coconut Creek, Coral Springs, Tamarac, Parkland, Deerfield Beach, and West Boca and offer free consultations daily.