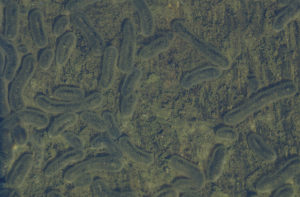 The amount of people with gastrointestinal issues is growing, and at an alarming rate. Those with autoimmune diseases and some cancers are sure to have GI issues, like IBS-D, IBS-C, gut infections and even parasites. Parasites use to be thought of as a myth; only if you traveled did you possibly end up with one. But now, since our environments have become more sterile with the use of antibacterial products and antibiotics, our food industry issues, plus the disconnect with playing in dirt, parasites are another element in healing that needs to be tested and not overlooked.

It is estimated that as many as 50% of Americans have a parasite and in those with chronic health issues and diseases it’s as much as 80%. Fatigue, regular gut and stomach pains, chills and fever, loss of appetite, chronic or cyclical diarrhea, gastroparesis, eye health issues, chronic skin eruptions, and anxiety are good indicators that testing for a parasitic infection should be considered. In the cases of irritable bowel syndromes, irritable bowel diseases, autoimmunity, and environmental and food allergies then testing should absolutely be done. Another major sign that bacterial and parasitic testing should be done is if a specific diet or an elimination diet has been followed strictly for a couple of months with no positive results. Of course it is possible to host a parasite and be asymptomatic; usually the strength of one’s health can keep certain minor symptoms hidden. Although food changes and lifestyle changes can help some symptoms, they will not eliminate a parasite.

Testing for parasites can be difficult. The common problem with the basic insurance- covered testing for parasitic infections is that many results will show nothing or many times false negatives. Even in more advanced testing, positives might show but for what seem like opportunistic parasites. However, even opportunistic bugs can be issues. Look at the cases of SIBO or small intestinal bacteria overgrowth: these are bacteria healthy humans have, they are just in larger populations or in the wrong area of the digestive tract. Even “good guys” can be “bad guys” if it’s upsetting the microbiome and leading to health issues.

Parasitic infections can be from three different organisms: protozoa, helminths, and ectoparasites.   Protozoa live and multiply inside the body. They are usually anaerobic, meaning they can live without oxygen. They spread through food, water, soil, waste, saliva, mucous and blood including sexually transmitted. Helminths can live in or outside the body. This is your worm family: tape, flat and roundworms. These guys are usually in food, water, soil, or sometimes spread by other insects and creatures. Ectoparasites are ones that live in and on the skin: think fleas, ticks, mites, etc.

Tapeworms, hookworms, blood flukes, pinworms, blastocystis hominis, and giardia are the most common parasites found in Americans. Tapeworms are most common from eating animal products. Each animal can house a different species of tapeworm; pork has a different species than a tapeworm found in beef, fish, etc. There are currently over 5,000 species of tape worms and even eating a diet free of animal products will not keep you from housing a tapeworm. Blood flukes and liver flukes are more common these days infecting more than 200 million people. The sexually transmitted infection trichomoniasis is considered a parasitic infection as well, as it is an anaerobic protozoon. As more evidence is compiled, the most common parasites that are found in functional medicine practices are:

Depending on results of the testing, getting rid of parasites can be a whole other challenge. Some are much easier to get rid of than others. Results may show that there is a slight elevation in an “opportunistic” bug, but even in those cases many functional practitioners will still advise that it be brought back in balance. There are a lot of “parasitic cleanses” found on the internet. It is strongly advised to work with an experienced health professional while doing a parasite cleanse. However, if you are simply doing a parasite cleanse for “balancing” purposes, you may feel confident enough to do it on your own.

Most parasite cleanses should be about 4-6 weeks long. Treat with herbs and botanicals along with following a diet for two weeks, then off for a week to a week and a half, then treat again for another two weeks. This allows for any parasites, their eggs or off spring or even more stubborn species to be eradicated more successfully.

The most common botanicals to use in eradicating parasites are:

Most cleanse formulas and kits will contain these ingredients in proper dosage measurements. Each company usually has their own specific formula with added things like thyme leaf, berberine sulfate, monolaurin or other coconut components, garlic, uva ursi, etc.

Eating a specific diet is very important while removing parasites. Parasites eat off other organisms (bacteria, yeast and fungi), their waste, and digested food. Following a Paleo diet that is 70% vegetables is a great idea and will significantly limit sugars and certain carbohydrates that reinforce bacteria and yeast survival. This will limit the number of bacteria, yeast and fungus that are also inhabiting the gut that parasites feed on. Having a day or two of just broth and water throughout the week has been shown to be very helpful in cleaning out the gut as well. Fruit is debatable, however limited servings per day of fruits like blueberries, raspberries, and apples are generally still ok. Pork tends to have higher amounts of bacteria unless you are familiar with the farmer and their practices; otherwise steer clear of it and keep it limited afterwards as well. No alcohol during the parasite cleanse. Pumpkin seeds and papaya seeds are known as excellent parasite and bacterial killers. Including these in the diet daily and sometimes multiple times a day is a must. Garlic, onions, and ginger are also very helpful.

The ability to eliminate the dead bacteria and yeast, the parasites, and the other toxins created from these things is extremely important. If constipation is an issue using magnesium glycinate at a dosage that shows results should be used daily (starting at 300mg and going up from there). Using green coffee enemas can be very helpful during the parasite cleanse. Finding an experienced practitioner who has certain colonic or hydro-colon therapy protocols is also an excellent addition. Use this practice in the more serious conditions.

Acupuncture be very helpful while getting rid of gut infections like parasites. It can strengthen the energy that is used to move the digestive tract, helping with elimination. It can also help with the fatigue and general malaise often experienced by those hosting a parasite.

If you are interested in reliable lab testing for parasites and for treatment to eradicate them, give Dr. Robert Hebst a call. He, along with Amy Carlson, can help you formulate a plan of action that will help you start healing.

Amy Carlson is a Holistic Nutritionist who practices a whole-foods based approach in helping the body to heal and thrive.  She has a strong interest in sharing what she has learned so that everyone has the opportunity to live in a healthy body.  “Each body has the ability to heal if it is given what it needs and the understanding of why it is hurting is discovered and nurtured as well.” Learn more about her approach to wellness by visiting her website.