Coping with Depression and Seasonal Affective Disorder with Chinese Herbs

Autumn is here. Winter is coming.

No, really. Even in South Florida. The early morning air is now crisp and cool, and the humidity is low. The seasonal change is very subtle in Florida, but there are changes. Daylight is shorter, darkness comes earlier, and with the time change, the sun sets soon after the workday ends. Traditional Chinese Medicine (TCM) views autumn as the season of Metal in Five Element Theory, representing the inward and contractive movement of energy.

In the transition from summer to fall, we move from the external, expansive nature of summer to the internal, astringing nature of autumn. It’s a season that is setting limits and protecting boundaries. It’s the time for enjoying the fruits of hard work from spring and summer and also letting go the excessive accumulation by cultivating one’s mind and body to prepare for the storage and introspective energy of the winter.

Fall is a wonderful time for South Floridians, but it can also be very challenging for people who are hindered by depression. In Chinese Medicine, the organ associated with Fall and the element Metal is the lungs, and the emotion associated with the lungs is sadness and grief. The lungs are associated with clear communication, reflecting a positive self-image, and the ability to let go and be content. When one has difficulty coping with loss and changes, the lungs are probably out of balance.

Sometimes the lungs are in a deficiency state, and the person might be overwhelmed with grief or prolonged sadness similar to the Western medicine diagnosis of Seasonal Affective Disorder (SAD). If the grief and sadness in autumn are not being addressed and expressed properly, it will eventually lead to clinical depression. On the other hand, if a preventative approach is taken before the true winter comes, “SAD” and depression can be significantly reduced.

Overview and Treatments in Conventional Medicine for Depression/SAD

Clinical depression and Seasonal Affective Disorder share similar symptoms and presentation. Patients can have a sense of hopelessness, sadness, loss of interest, anger, and irritability. All people experience moments when they feel sad or blue, but these feelings usually pass within a couple of days and are not indicative of depression.

Seasonal Affective Disorder is a type of depression recurring with seasons, more pronounced during the late autumn and winter, especially in areas that lack sunlight, and it gradually subsides in the spring and summer. According to DSM-5, to be diagnosed with clinical depression, a patient must experience persistent feelings of sadness and hopelessness and lose interest in activities with symptoms lasting for at least two weeks.

Both SAD and depression are very common in US with over 16 million of Americans affected. SAD may be present in up to 20% of the US population at any given time, and the new trend shows the percentage still on the rise. Besides being recognized as serious public health issue, it also causes a significant economic burden on society. Research shows that the cost of individuals with depression in the US increased by 21.5% between 2005 and 2010 from $173.2 billion to $210.5 billion.

Existing treatments for MDD usually take several weeks or months to achieve their therapeutic effects. During this lag period, patients continue to battle with depression and are at great risk of self-harm. With awareness of the limitations of antidepressant medications, many researchers are seeking new, improved therapeutic approaches to deal with depression.

Traditional Chinese medicine (TCM) is getting increased attention as a method for meeting the demands for a higher remission rate, faster onset, persistent antidepressant action, and fewer adverse effects. TCM is one of the oldest medical systems in the world, and includes Chinese herbal medicine, acupuncture, and massage. Herbal medicine has been used for the treatment of depression in China for centuries with more frequent usage in Western countries. 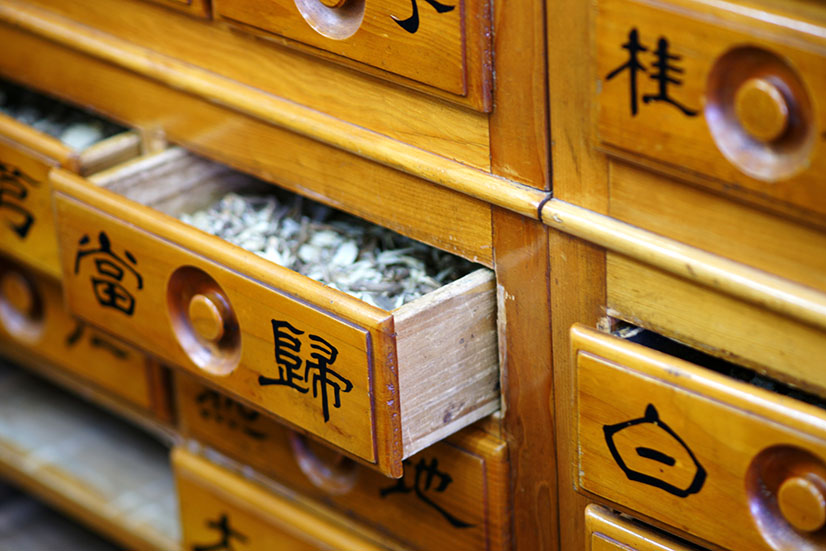 In TCM, depression is called “Yu Zheng,” interpreted as “depression syndrome.” Yu Zheng is a general term for disorders caused by emotional frustration and qi stagnation, referring to a specific set of psychological or affective presentations such as depression, irritability, moodiness or anxiety. Huang Di Nei Jing (Yellow Emperor’s Internal Classic), written in 221 BC, was the first book to develop and discuss in an organized fashion the diagnostic theory and treatment of the “obstruction of the spirit” and its imbalances. The etiology of depression is described here:

TCM Syndrome Differentiation and Herbal Medicine in SAD and Depression

Liver Qi Stagnation – The Liver is the traffic control center of the body, directing the free flow of Qi; when there is too much “traffic” backed up, the body might be overwhelmed with the obstruction. The signs and symptoms of this syndrome are depression and mood swings, bloating and hypochondria pain, frequent sighing, crying fits, poor appetite, constipation and irregular menstruation. The main herbal formula used to treat this syndrome is Chai Hu Shu Gan San.

Qi Stagnation Turning into Heat  – Just like long-term traffic back-ups with drivers honking and screaming out of frustration, the body will do the same if liver Qi is not circulating properly. The body will start to react angrily, sometimes, even violently and have “heat.” The signs and symptoms are a short temper, irritability and anger, bitter taste and dry mouth, red eyes, headache, acid reflux and constipation. The representative herbal formula for this syndrome is Dan Zhi Xiao Yao San, and is sometimes known by its other name, Jia Wei Xiao Yao San.

Phlegm-obstructed Qi (Plum Pit Qi) – In TCM, “phlegm” can be substantial (palpable or visual) or insubstantial (affecting the mind). It’s the pathogenic factor that generates a disturbed spirit and weird symptoms. Plum Pit Qi syndrome is known as Globus Hystericus in conventional medicine. Signs and symptoms of phlegm-obstructed Qi are the sensation of having a lump or something stuck in the throat, hypochondriac fullness and pain, depression, and chest distention. The main herbal formula for this syndrome is Ban Xia Hou Po Tang.

Spleen and Heart Deficiency – In TCM, the spleen is the processing center for extracting nutrients and responsible for delivering it to other organs. When the spleen is not working properly, all the other organs function poorly due to malnourishment. The most affected organ is the heart. The heart houses the spirit, and it is the blood chamber that nourishes and calms the mind. Signs and symptoms of a spleen and heart deficiency syndrome are excessive thinking, fatigue, dizziness, palpitations, insomnia, poor memory, a pale complexion, poor appetite, crying fits, and disorientation. The two formulas that help best with this syndrome are Gui Pi tang and Gan Mai Da Zao Tang.

Kidney and Heart Yin Deficiency – Long-term depression and excessive worries can lead to over-consuming blood and essence, giving rise to sleep disturbances and heat signs. In TCM, Kidneys house the “reserve” of one’s vital energy, and once that reserve runs low, it enters the chronic fatigue stage, a more complicat ed condition to treat. Kidney and Heart Yin Deficiency signs and symptoms are as follows: depression, restlessness, palpitations, insomnia, night sweats, vivid dreams, heat sensations in the palms and soles of the feet, and a dry mouth and throat. The representative formula for this diagnosis is Tian Wan Bu Xin Dan.

Other suggestions for Seasonal Affective Disorder and Depression:

Traditional Chinese medicine (TCM) treats the body as a whole, including seasonal factors and diet. Treatments are uniquely tailored to each patient with the goal of healing the body and mind, as well as restoring the spirit during seasonal changes. It is important to remember that balance in everything from diet to the living environment is essential in sustaining a positive outlook and a healthy mood.

A proper TCM diagnosis must be made by a professional, licensed acupuncturist. Acupuncture, herbs, lifestyle management, and food therapy are excellent tools to help patients cope with Seasonal Affective Disorder and depression.