“The most difficult battles in life are those we fight within.” Chinese Proverb 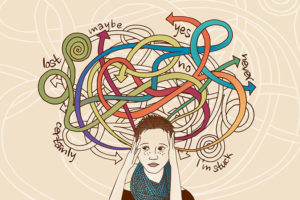 By Susan Tretakis – If Olympic medals were given for overthinking, I would definitely win the gold. In truth, I overthink my overthinking. I overthink texts and emails – wondering if I missed something, wondering what they may have meant, wondering if I miss-spoke, or miss-typed. I can overthink so much I paralyze myself into some alien frozen state. A recent post on notsalmon.com summed it up perfectly: “Over thinking ruins you. It ruins the situation. It twists things around. It makes you worry. It just makes everything worse than it actually is.”

Overthinking has been a part of my mindset for so long that I did not realize how apparent it could be to others. Last month, casually, on three separate occasions, my acupuncturist asked me to stop overthinking three separate issues. By time three, I was annoyed, and I told him that I was not sure I could just stop overthinking; the behavior was so ingrained within me it was like a limb.

His response was to smile (he ALWAYS smiles when I get annoyed) and suggested that I research the functions of my spleen and stomach within Traditional Chinese Medicine. He would treat my Spleen and Stomach with acupuncture and herbs, but perhaps I’d like to read what TCM says about overthinking.

I will say that I overthought this assignment the entire ride home; here I was concentrating on my liver and kidneys and now I had two other organs to worry about? Did I want to go down this path? What was he trying to tell me – was I worse than I originally thought, did he see something awful on my tongue or in my pulse? What was he really trying to tell me?

So, quite clearly, does Traditional Chinese Medicine.

“The Spleen governs the thought. Note: in traditional Chinese medicine the Spleen is referred to as the collective work of some organs and systems participating in the digestion rather than the anatomical organ spleen. A healthy Spleen that functions like one vigorous unceasing system will result in clear thoughts that are easily processed, commanded and dealt with. Thoughts come and go naturally and with ease. A deficient Spleen will change the healthy process of “thinking” into the unhealthy “over thinking”. Thoughts transform from being obedient servants into difficult masters and become in charge of the mind instead of being the opposite. They feel like they are stagnant, “undigested” and difficult to move on from. They seem to appear whenever they please and stay as long as they like.”

Other TCM sources told me that “the spleen also influences our capacity for thinking, studying, focusing, concentration and memorization.”

And then there is the Stomach.

“According to Traditional Chinese Medicine, the Stomach (and its partner the Spleen) is most affected by chronic worry, anxiety, or overthinking. Remember, the Stomach is responsible not only for digesting food and drink, but also for digesting your emotions and thoughts, keeping what nurtures your spirit and letting go of what doesn’t. The Stomach’s element is Earth. Just as Mother Earth’s job is to nurture growth and all living creatures, Stomach Qi is what “feeds” all the organs enough power to perform their jobs.”

TCM World summarizes: “Worry, anxiety, and overthinking are the emotions associated with the Stomach. If you constantly worry or over-think things (especially negative thoughts), get anxious easily, you may have a Stomach imbalance or function disorder. Experiencing any emotions chronically or excessively can damage Stomach and digestive health, as the digestive system processes not just the food you eat, but the thoughts and emotions that you internalize.”

As I see it, the solution has two roads: first, taking care of the Spleen and Stomach and then breaking my overthinking cycle which by now, is no longer simply a bad habit, but has become second nature..

The TCM suggestions for a healthy Spleen include: “Eating warm and dry foods to lessen inner dampness. Individuals with deficient Spleens should stimulate movement because the digestion is an unceasing uninterrupted process of movement. Movement can be conveyed in the form of physical exercise and/or breathing exercises. TCM practitioners suggest a form of movement – “active” such as cardio for example or “passive” such as yoga – that fits your character best as well as engage in some deep breathing exercises. Ginger, nutmeg, fennel, leek, rice, black beans and molasses are all good foods/spices for Spleen health.”

Some ways to care for your Stomach include: “Eating mostly cooked or warm foods and beverages. In TCM, the Stomach is ‘warmth-loving’ so if you are deficient, eating cold or raw foods and cold drinks can damage Stomach functioning over time. Raw fruit is generally all right as the essence of fruit is light. Most importantly, and frequently overlooked, is the necessity of allowing your Stomach to rest. It is suggested that you eat no later than 7 PM, allowing your Stomach to rest with your other organs as you sleep. If you eat a lot or heavy foods at night, your Stomach works overtime when it should be resting.”

Worry and overthinking are the forces behind that knot in your stomach, the clenching of your jaw, your trouble falling asleep and the furrow in your brow. You know it’s not accomplishing anything, but your mind resists getting off the hamster wheel.

How can you change the channel?

Turns out, there are Acupuncture points for that. “The Stomach and Spleen are responsible for digesting not only our food, but our lives: absorbing what’s useful, letting that nourish us, and passing on the not-so-useful stuff to the Large Intestine so we can let it go. Worry is the mental equivalent of sluggish digestion, or chewing on the same thing over and over again without swallowing. Just as there are points to aid digestion, there are acupuncture points to help dissolve the mental knots.”

Obviously there is a very definite mind/body connection here. But taking care of one’s body, either through Acupuncture, Chinese Herbs, or dietary recommendations is one part; one also has to deal with one’s mind.

“It starts with realizing that the stakes aren’t as high as we think they are. The reality is that almost every single decision we make in our lives are extremely low stake decisions. Even the decisions that might seem like a big deal today are relatively insignificant compared to the life-or-death decisions our ancestors dealt with. Most of us are not making decisions that require an immediate fight-or flight response which means, yes, we can take our time, do our research and make a decision. But most importantly, one has to realize that there is no reason to allow any single decision to cause us so much stress.”

I suspect that many people cannot understand how stressful it is for someone to try and explain what is going on in their head when they don’t fully understand it themselves. But I think I have to learn to make peace with me; to attempt to understand the “what and why” I am overthinking.

If Traditional Chinese Medicine has taught me anything, it is that changing my relationship with stress – which includes overthinking – is the most beneficial thing I can do for my health.

If you believe that you or someone you know can benefit from acupuncture and Chinese medicine, take advantage of the free consultations offered daily by The Acupuncturists of Margate, Coconut Creek and Coral Springs Florida.

If I could give Dr. Landon more than 5 stars, I would because he is the best of the best! I've been a patient of his for many years, and whether he treats me for anxiety, neck pain, or fertility, it's always the same quality care. Dr. Landon has a true gift, and I'm so grateful that I was referred to him way back when because I know, I will always walk away feeling better than when I walked in the doors. ALWAYS!