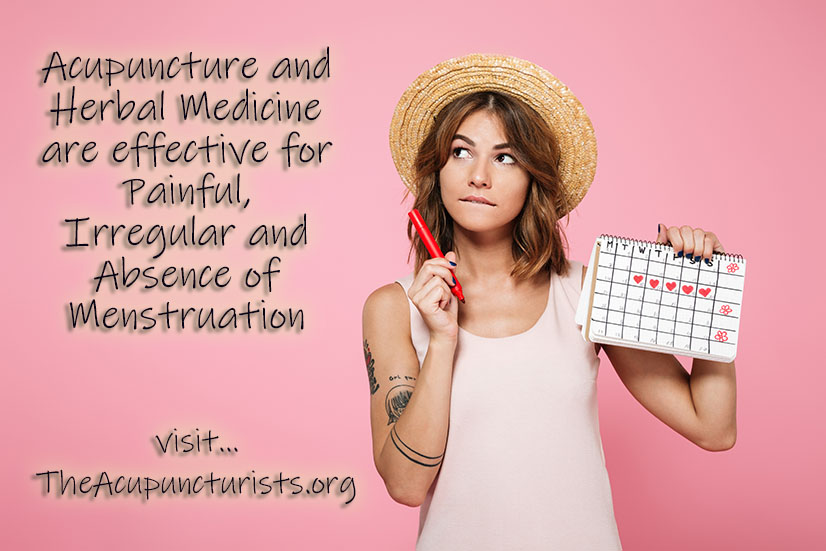 Menstrual irregularities can simply be explained as the abnormal occurrences in the menstrual cycles of women but they are much more complex than that. They range from painful periods to heavy bleeding and painful cramping to absence of period altogether. According to Sweet, M. G., Schmidt-Dalton, T. A., Weiss, P. M., & Madsen, K. P. (20120), menstrual irregularities are known to pop up in between 9% and 14% of women who are within the child bearing bracket. While some of these conditions are famous for being just discomfiting, others can get a little more serious and require a medical remedy.

Amenorrhea, Dysmenorrhea, and Oligomenorrhea are some of the more studied problems out there, and they have varying degrees of effect on those suffering. Let’s take a closer look at the three most common forms of menstrual irregularities and then discuss how acupuncture and Chinese medicine can effectively treat:

Amenorrhea – The Mayo Clinic defines amenorrhea (pronounced uh-men-o-REE-uh) as the absence of menstruation or missing at least one menstrual period. This includes girls who have not begun having periods by age 15, as well as women who miss at least three periods in a row after having normal menstrual cycles.

Signs and symptoms of Amenorrhea – The most obvious sign of this condition is of course, the absence of menstruation. However, there are other, less pronounced indicators such as:

Dysmenorrhea – Also known as painful cramps or painful periods, this is without a doubt one of the most prevalent irregularities of the menstrual cycle. In 2010, The National Center for Biotechnology Information (NCBI) published a study by Anil K Agarwal and Anju Agarwal that took a look at the prevalence of this condition among adolescent girls. The findings were shocking; 79.67% of the 970 girls studied experienced dysmenorrhea, with 37.96% experiencing severe symptoms.

Nag(1982) reports that the prevalence rate in India is 33.5%, with doubt being cast over the big skew between the publication’s reports and the conclusions reached by others. George and Bhaduri(2002) report that the prevalence of painful cramps in Indian women is actually 87.87%.

Symptoms of dysmenorrhea – WebMd makes it clear that cramping/pain is the most prevalent sign of this irregularity, especially for those suffering from primary dysmenorrhea, which is defined as the regular cramping. It is felt in the lower abdomen, starts a day or two before the onset of periods and sticks around for three days. Secondary dysmenorrhea is when you have menstrual cramps that are caused by an underlying condition, such as a reproductive disease, a structural abnormality, or an intrauterine birth control device. This type of menstrual pain is often more severe and longer lasting than the cramps caused by your period alone.

Other less subtle signs include:

Oligomenorrhea – Healthline.com argues that the existence of oligomenorrhea is determined by the infrequencies of a woman’s menstrual cycles. Those women who go for up to 5 weeks without periods and experience them less than 9 times a year are considered oligomenorrheic. Experts agree that while this is in most of the cases not a cause of worry on its own, it could be a cover for an underlying illness, hence the need for a thorough medical checkup.

The university of Maryland Medical Center puts forth a list of possible remedies for menstrual irregularities. According to the center, birth control pills can be used to mediate the effect of imbalanced periods and reduce the levels of bleeding sustained. LNG-IUS (Mirena) is an Intra Uterine Device that is popular and prescribed often but if it works well is debatable for regulating menstrual bleeding. Non-Steroidal Anti-Inflammatory drugs (NSAIDS ) are also considered as a reliever for painful cramping. Such drugs include ibuprofen and naproxen.

When it comes to surgical options, endometrial ablation comes to the fore. This is a rather simple process whose end game is do away with the internal lining of the uterus, known as endometrium. Hysterectomy, which removes a part of the entirety of the uterus, is also an option in the most extreme circumstances.

The University of Maryland also reports that in the year 2012, the FDA gave the greenlight for Natazia, a birth control pill, to become a viable treatment for heavy bleeding during menstruation.

The efficacy of Western Medical Treatments in treating medical irregularities has always been questioned. There is a school of thought which contends that these approaches cause pain to the patient and do not offer permanent remedies. Therefore, one has to keep going to the doctor or pharmacist for medication – this can be costly and exhaustive when you have to do it every other month.

Acupuncture has risen to the fore as an alternative treatment for irregular menstruation as it naturally prompts your body back into balance.

Acupuncture for Amenorrhea, Dysmenorrhea, and Oligomenorrhea.

Acupuncture and TCM have been lauded as the perfect solution for lower abdominal pain, irregular periods or no periods at all, as the flow of energy in various areas of the body can be effectively manipulated and balanced with acupuncture needles and Chinese herbal medicines. In fact, at our clinic in Margate Florida, these disorders are part of a group of women’s health issues that we specialize in treating.

For a long time, acupuncture and Traditional Chinese Medicine approaches have been used to treat menstrual disorders in women. The belief here is that the conditions are caused by the lack of harmony in the Qi (understood as life force), as well as the imbalance of the meridians.

A study that first appeared on the African Journal of Traditional, Complementary and Alternative Medicines and published by the US National Library of Medicine puts forth a compelling case for the use of acupuncture in handling menstrual irregularities. Li et al. (2008) contends that acupuncture needles and TCM approaches have a therapeutic effect on dysmenorrhea patients. In the above study, acupuncture was used on a sample of 180 females suffering the condition. The control group used the regular Western approaches. The first team recorded an efficacy rate of 93.3% while the control group peaked at 53.3%.

Li et al. (2008) have also stated that acupuncture and TCM, by focusing on the Kidney Qi, are a great approach to vaginal bleeding over the course of menstruation.

In terms of amenorrhea, there are several significant studies of women with fertility problems, which are sometimes connected with amenorrhea, suggesting that acupuncture may help promote ovulation and regulate menstrual cycles. Stener-Victorin E et al.  studied the effects of electro-acupuncture on anovulation in women with polycystic ovary syndrome and found that repeated acupuncture treatments (10 weeks) induce regular ovulation in more than one third of the women with PCOS studied.